At the bottom of the rafters a timber fascia board protects the rafter feet from the elements and provides a fixing for the guttering. Overhanging eaves usually incorporate soffit boards. These can be made from a variety of materials (traditionally softwood boarding – but nowadays, ply, or a number of synthetic materials) supported by a simple timber framework nailed to the rafters or as shown in the drawing below. The soffit board prevents insects and birds from gaining access to the roof space and provides a surface which is relatively easy to decorate. Overhanging eaves provide better weather protection to the wall below but are more expensive.

In some houses the external walls continue above the eaves to form parapets. In these dwellings an alternative eaves detail is required. The rafters were often cut as shown in the diagram. Drainage would be provided with a zinc or lead lined gutter where the rafters meet the parapet.

Roofs with parapet walls cannot, by their very nature, have rafters projecting beyond the wall plate. It is normal practice to cut the rafters as shown in the diagram.

The majority of houses with traditional roofs are too deep for simple closed couple or collar roofs. Houses two rooms deep normally require roofs which can span at least 7m. The load from the roof coverings, snow and wind will cause the rafters to deflect and will place extra strain on the nails securing the rafter feet. In theory it is possible to increase the span of a roof and prevent deflection by using ever increasing rafter sizes. However, the use of very deep sections is both uneconomic and also creates handling problems on site due to their weight. In traditional construction this problem was solved by the introduction of a purlin. A purlin is a large timber beam which generally supports the rafters mid span thus preventing deflection. The purlin spans from gable to gable (sometimes with intermediate support) and, besides supporting the rafters, provides lateral stability to the gable end walls.

The purlin roof is a very common type of construction, particularly in its simplest form, where it is used extensively in terraced housing. 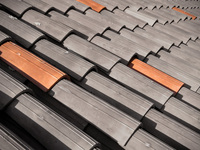 Very occasionally roof structures have timber trusses to support the purlins. These were quite common up until the 1920s and are some- times found in very large buildings, where big rooms resulted in few load bearing walls. The truss is made from very large sections of timber, bolted and strapped together and is capable of spanning from external wall to external wall. The function of the truss is to support the purlins, and on very wide buildings, such as old warehouses, timber trusses may support three or four purlins on each slope. They are exceptionally rare in modern construction although a lightweight version was popular in the 1950s, designed by the Timber Research and Development Association, as a response to the post-war shortage of materials.

The ceiling joists which span from plate to plate are often of smaller section than rafters, and to prevent them sagging in the middle some form of intermediate support is required. If no intermediate support is available in the form of internal load bearing walls, the most common solution is to secure the ceiling joists with a horizontal member, called a binder, and to hang the binder from the ridge. An alternative, of course, is to use joists of increased depth but this is usually a more expensive solution.

Most modern houses are built with cavity walls and a typical eaves detail is shown below. The cavity is normally closed before positioning the wall plate. This acts as a cavity barrier in case of fire and prevents moist air from the cavity entering the roof space where it can condense and lead to conditions which encourage dry rot to occur.

Closing the cavity is not necessary if the cavity is filled with insulation. However, recent guidance from the National House Builders Council suggests that there have been some incidences of horizontal cracking just below the wall plate caused by differential movement of the internal and external leaves. They attribute this to the use of light- weight blocks in the internal leaf. The NHBC, therefore, recommend that cavities should be closed with a flexible mineral wool positioned inside the top of the cavity.

Modern building regulations demand the use of straps in new roofs and it is a current requirement that the gable walls are tied back to the roof structure at intervals of not more than 2m. The strapping is to prevent movement of the gable walls under wind load. This strapping is required at rafter level and, in steep roofs, at ceiling-joist level to prevent the middle of the wall from buckling or bulging.